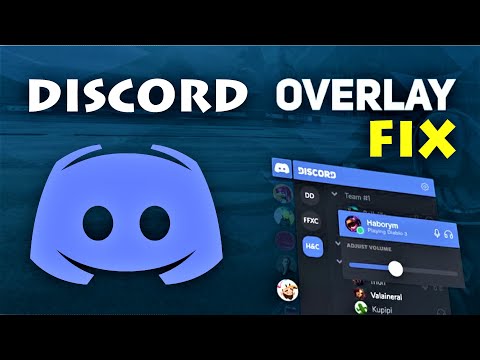 Discord is the best platform to communicate with people online. Its a popular instant messaging and VoIP application ( Voice over Internet Protocol ). But some of the users complained about Discord Overlay not Working issue. So we analyze the issue and make all the possible solution in this article.

​What is Discord Overlay Issue?

Discord overlay is a useful feature. This particular feature is only included in the most recent edition of discord program, not to get in older versions, which join your text voice & chat with your game-play by revealing a semi-transparent window in your Display while playing games.

This additional feature comes up with some minor bugs which make trouble for the users which conflict your entire gaming experience but don’t panic can be solved easily.

How do I FIX discord overlay not showing?

There is a reason if your Discord Overlay Not Showing. The first thing you need to do it Update your discord app to the latest version and secondly check your game actually supports Discord overlay or not. Afterword if the app is creating problem again then this happening because of BUG and you can solve it directly by below methods.

But when I search about it, I found some initial solution of this sometimes the feature called hardware acceleration and Populer third-party antivirus brand like Avast, Mac safe applications were the main culprit behind it. Because they take some permission at the time of installation and when you RUN the Discord app, they start creating problem or Not showing discord overlay feature.

How to Solve Discord Overlay not Working issue

But if you were facing some issue while playing in those games, we recommend you to apply this solution to your app. There are numbers of solution list for Discord Overlay not Working problem, which you keep in mind and apply which you realize that create a problematic situation for you actually. But here are the list of Top 10 + 1 Bonus solution go ahead.

This is a very obvious reason if you arent enables any feature of how it starts work. So first enable it by below steps.

Note: If you can not find your game, you can add it by clicking on the ‘Add it‘ link.

This is also happening because you were not giving all the admin permission to the app. So here are some simple way to grant admin rights.

Also check out How to add Roles in Discord also Assign, Manage, Remove, Or Delete Roles.

This is suggested by many technical geeks that using a premium VPN instead of a proxy is a much better choice from the point of view of reliability and also security.

#4. Exclude Discord From Antivirus Scanning and Check if Windows Firewall is blocking the overlay.

Some antivirus and also pre-installed Windows security Firewall is considered as Discord overlay as a suspicious process and flagged it wrong and preventing it from running properly also not allow it full access permission that’s why in some task discord failed to fulfil users requirements.

But developers of Discord team says that program has nothing which poses a threat to your operating System.

So the solution is going through to your installed antivirus software then check any Discord-related any entry found in the list of blocked applications or services. If it blocked just unblock it by below guide in windows firewall.

Rebooting and Restarting the System is often all in one solution for all the problem. So try it once before taking any other steps, this might be the easiest way to solve Discord Overlay not Working issue.

Hardware acceleration is a process which utilizes more computers GPU power if the Discord was not working smoothly on CPU usage and Run it more efficiently. This is good, but sometimes it’s not working on your favour. So just disable it via below instructions.

One more informative article on Discord How to Link Twitch to Discord Integration Through Desktop or Mobile also Unlinking.

Sometimes Other apps which create interruption from other applications running on your PC, running on background or not but they interfere, and PC might be causing that Discord overlay not to function as expected. Most of the time, the alternate apps of Discord like steam or twitch, or which have the same feature as an overlay can encounter both the apps. So You need to close it that have access to your microphone. That is the also reason behind when you face Discord Mic Not Working Problem.

So next you need to check you assigned a hotkey for enabling overlay. And if its assign successfully ensures that it does not conflict with some other hotkey in between both games or Discord itself. Here is how to activate a discord new hotkey.

If you are a game lover or fanboy, then you already know all the games come up with different screen resolutions. So we need to do some setting to retrieve it, or maybe you mistakenly dragged the overlay off the screen. It starts working fine, just locate it correctly. So just reset the position.

Here is discord money making strategies How Does Discord Make Money and How to Make Money in Discord.

If you scaled your discord display more than 100%, you might not be able to locate overlay. So you need to do is reduce the percentage in exact resolution and then see the problem will FIX automatically.

So if you apply all the above solution step by step, but still the problem occurred, then make sure that the app is up to date with the latest version to get rid of discord overlay.

On the other hand, the problem may have started after Discord got upgrade. Since upgrades are published frequently, a bug might have been released. In the case, there isn’t anything you can do in order to solve the problem than to await another upgrade (which generally gets installed automatically).

It might also be that some files got corrupted or lost while the program has been installed or later. Consequently, if you have the most recent edition of Discord, then it might help to solve overlay not working difficulty.