People who have big servers are frustrated with unknown messages more in discord and they find out the way of How to block someone on discord also unblocking them. This is obvious I tell you why because if you were an owner of any discord server that shares with many members so they can DM ( message ) you in personal chat without a friend request it’s like open for a joined member.

But when we have a huge server it’s ridiculous to get notification messages by random users every time when you open discord. Don’t worry I tell you the way to get rid out of it. And by chance, if you mistakenly blocked someone then I also cover both topics of How to block or unblock someone on discord for any platform Android, iOS, or even in PC, or for mobile. So just scroll.

Discord is a freeware instant messaging and VoIP ( Voice over Internet Protocol ) application design by a digital distribution platform mostly used by gamers but now a day many entrepreneurs, YouTubers and for studying purposes also because of its reliable screen share feature it got more love in past few years. And it easily customizes with the third-party application such as Spotify, twitch, Ps4 and youtube. Discord is best for chatting in image, video, text, and audio communication around the entire world.

How to Block or Unblock Someone on Discord

If a user doing misbehave continuously on your server then apart from blocking there is more other option which is like give a warning to them or directly kick out them for permanently. The function is to block, mute, deafen, report, kick, or ban any individual persons. There are many Discord bots also which do this pretty easily and they block, kick, etc multiple users at a time automatically. But in all these options Bans is the Topmost restriction which you apply on the user. So let’s jump to the main topic.

How to Block Someone on Discord in Windows or Macbook 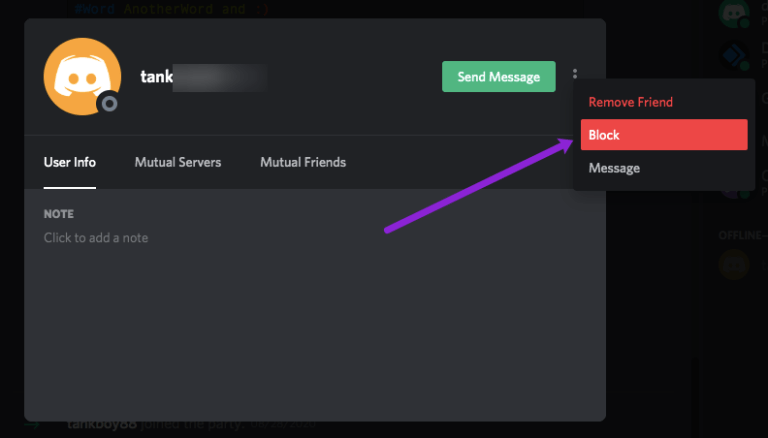 How to Block Someone on Discord through Mobile ( Android or iOS )

How to Unblock Someone on Discord in Windows or Macbook

How to unblock Someone on Discord through Mobile ( Android or iOS )

NOTE: It’s difficult to find the blocked person if you have a huge DMs list of members because the username disappears after blocking. But there is no other way so you need to aware before blocking someone. One thing you can do is switched off DMs from non-friend profiles if it works in discord server messages.

Block and unblock the user without knowing them it’s working like when you block they never know until they open their chatbox messages with you. And as they opened he realize he can’t able to send you messages then he knows you blocked them. Whenever he tried to DM you this message will show “Your message could not be delivered… “

Blocking someone is good if he is encountering you continuously with a meaningless message. And discord has a strict Term & Condition policy for this type of violation. But I also suggest you use other alternative options also like Mute, Deafen, kick out, or ban. Like Deafen or mute option will stop the person from hearing you speak in the discord server. If muting and deafening someone isn’t enough to stop them from bothering you then you have to take action against them like block, ban, or kick out. Although I mention the topic of both how to block and unblock. So use it to maintain peace in our discord server.

Question: Does Discord Record our Messages, conversation, or data?

Answer: Yes, Discord maintains a log of each conversation this is only as a future perspective if any kind of situation comes. This includes all the images audio & video files you send & receive even external links in DMs and all the text messages of your discord chatbox. But it never reveals with anyone.

Question: It is possible to block someone in discord without knowing them?

Answer: Ya it’s possible somehow. Discord never sends any notification if you block any user. But over time The user will know about that because you will not be showing on their friend’s list. And another way if you both are still on the same server then a message will show him/her that they’ve been blocked by you.

Question: If I block someone in discord, can they still see my messages?

Answer: As I told you if you both are still on the same server then he knows about you blocked them and also he can see the old conversation in between both of you. But initially, he opens the chatbox the messages are hidden until he uncovers the messages.